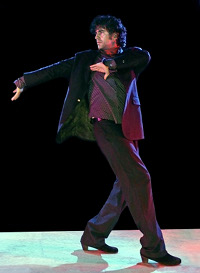 Sitting a few rows back from the stage at Barnsdall Gallery Theatre watching the Fountain Theatre’s monthly showcase of “Forever Flamenco!” this past Sunday, I was reminded of krump dancing. Let me explain. Since September I have been attending a krump session — a circle of dancers who congregate every Wednesday at midnight in a parking lot in North Hollywood — observing a style of dance that has its roots in South Central Los Angeles. If you saw Dave LaChapelle’s 2005 documentary Rize, you know what I’m talking about. If not, what brought me back to the after-hours dancing at the parking lot was the foot stomping (obviously), but more overwhelmingly, the emotional release the dancers wear on their faces and exhibit in their movements.

Without knowing much about flamenco, I have gleaned enough to offer that the histories of the people who created both art forms are similar in enough ways to inspire movement of such emotional magnitude. Both African Americans and Gypsies are historically oppressed groups of people who have expressed their experience via their bodies. Every foot slam, hand clap and outstretch of an arm delivers you to a different memory. The feelings that overcome you may not be the same ones the dancers express, but they serve the same purpose: They make you feel alive and connect you with humanity.

A flamenco show is an all-over-body experience. The dancers’ faces contort with feeling, their arms gracefully strike controlled poses in the air, and their feet pound the stage like tap dancers. Even the costumes — with ruffles, wraps, polka dots, lace, hot pink flowers and long trains — get in on the dramatic action. Illuminating it all is the music, which preceded the dance.

Singer Jesus Montoya’s classically scruffy, aching, heart-wrenching vocals powered the night of flamenco. Accompanied by guitarist Juan Antonio Gomez and percussionist Gerardo Morales, the trio had a jolly good time throughout the performances, laughing and calling out to the dancers and each other. It was almost as if Montoya were trying to get the dancers to crack a smile.

But that’s one of the beauties of a flamenco show — the audience and band interaction. (Another wonder is the constant hand clapping, which seems to be an unspoken code I can’t figure out.) Not only do the musicians yell out encouraging words (most often, “Olé!”); audience members yell out snippets in Spanish whenever it strikes their fancy. After an especially emotional stomp, or long and fast footwork set, the audience and musicians erupt with pleasure.

The climax of the night came after Lakshmi Basile finished her solo, “Fondo del Mar (Depth of the Ocean) Solea.” Her performance appeared cathartic — for her and the audience — as if there were no end to her emotional release, or ours. Just when you thought a flamenco dancer has finished a performance, they rev back up for a little bit more. Basile’s exertion was so complete, one of her clips went flying out of her hair. Olé!

While at times the Barnsdall Gallery stage was swirling with somber, it was mostly a festive atmosphere. Ricardo Chavez, the long male dancer, looked like he stepped out of the pages of GQ. I wasn’t surprised to hear that the woman sitting behind me takes his class in Santa Ana.

At the end of the night, the performers invited anyone who wished to come up on stage and dance in a circle they had formed. Much like the krump session I attend weekly, this is a space that encourages improvisation and freestyle, where the dancers share moves and challenge and inspire each other. I’ve seen this done at tap shows too, and this spirit exemplifies dance communities at their best.

For more information about the next “Forever Flamenco!” show, visit fountaintheatre.com.