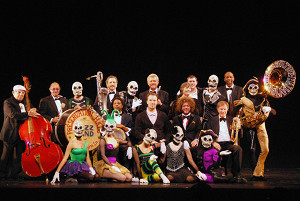 It may come as a surprise to some people, but Boise, Idaho, is a blossoming arts community. That’s where Trey McIntyre Project is based, and as dancer Brett Perry says, “It’s a really cool city, and we’re thrilled to be a part of it. It’s a community where we can get out and make a difference.”

During my conversation with Perry via telephone from his home in Boise, it becomes clear that Trey McIntyre Project — a contemporary dance group comprised of five men and five women between the ages of 19 and 34, 12 staffers and founder Trey McIntyre — values a sense of community. It was this inclination to engage that led Trey McIntyre to partner with New Orleans’ Preservation Hall Jazz Band Creative Director Ben Jaffe for their 2010 Hollywood Bowl debut. Over the past year, the two creative powerhouses have been working together again. On Nov. 22, they will perform their new collaborative work celebrating the distinct culture of New Orleans at Walt Disney Concert Hall.

Originally from Indiana, Brett Perry has been with Trey McIntyre Project since it launched full-time in 2008. He started dancing at 4 and landed a hot spot at the Juilliard School after high school. In his senior year, he met Trey McIntyre, and after taking his class, loving it and having a two-hour conversation with the choreographer at Starbucks, Perry accepted McIntyre’s offer to join the Project.

This year, the company has experienced an especially high turnover rate: three new dancers. “It’s exciting because they bring in brand-new energy, movement quality and visions of what they can bring to the dance company,” says Perry.

Trey McIntyre Project and the Preservation Hall Jazz Band have performed “Ma Maison” before — at the Hollywood Bowl last year. “‘Ma Maison’ celebrates New Orleans culture in the sense that they celebrate life after death,” Perry explains. “They are not afraid of death. It also celebrates the culture by bringing in the colors of New Orleans, especially the purples, greens and yellows of Mardi Gras, and we wear skeleton masks.”

“Some of the movement in ‘Ma Maison’ is more pedestrian-like,” says Perry. “Trey spent time in New Orleans during Mardi Gras and in different parades. He pulled so much information and inspiration from what people were doing, how they were dancing in the streets, how they were reacting to the parades and all of the music.”

The Project and the Band have also previously performed the second piece, “Sweeter End” together — in February in New Orleans. It focuses more on post-Katrina New Orleans. “There was graffiti that came out of the post-Katrina era, a big X on a lot of the houses and buildings, and Trey and designer Andrea Lauer were fascinated by this.” In this piece, a big spray-painted X makes an appearance.

“We’ve been collaborating with Preservation Hall for thee years, building a relationship,” explains Perry. “They are jazz legends, the face of New Orleans jazz. Last time we were there for 10 days. We get to see places that tourists don’t get to see, underground bars of the music scene that are off the beaten path. With New Orleans, I’ve never been to a place where you’re walking and out of every single storefront or restaurant or bar there is live music coming out. You can just stand on a street and all around you hear five or six tunes happening.”

For Halloween this year, the Project joined Preservation Hall in New Orleans for the Voodoo Fest. “It’s a whole ’nother crowd and new audience,” says Perry, who is more familiar with traditional theaters than festival grounds. Without a rehearsal with the band, they hit the stage and performed to a lively audience walking, talking, carrying beers and dressed in costumes, in an even louder environment with multiple bands playing at once.

HBO’s “Treme,” which chronicles the life of New Orleans residents three months after Hurricane Katrina, offers insight into the city’s tradition of second line dancing when it’s done after a funeral. People file down the street from the cemetery in a line filled with people dancing and musicians playing upbeat compositions. They say it is performed to aid the dead person’s soul in passing over to the afterlife. The living spectators also have to keep moving to avoid their souls being caught. These beliefs may have inspired McIntyre’s “Ma Maison.” Whichever the sparks, Trey McIntyre Project’s pieces overflow with elements of New Orleans culture, both the celebratory and the sad.

“New Orleans was built in the swamps of Louisiana,” Perry offers. “You’re not quite sure what the next step for that city will be. People in New Orleans know that they’re living in a situation that could potentially not be there in however many years.”