The Origins of Hip-Hop Dance 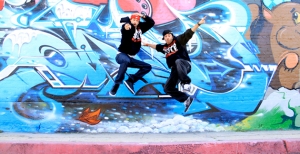 The term hip-hop dates back to the ’40s when African Americans would say they were “hip-hopping” when they went out on the town. Then again in the ’70s, Afrika Bambaataa referred to hip-hop as the culture he was championing that encompassed the four elements of deejaying, graffiti, emceeing and breaking. Hip-hop dance is very much a part of, and cannot be viewed separate from, the broader hip-hop culture, and often intersects with the other three elements.

While many of the dance moves and styles that are considered hip-hop dance are relatively new, their beginnings can be traced further back in history. In the ’50s and ’60s, tap dancer and all-around entertainer Sammy Davis, Jr. introduced fancy foot and floor work in his star-turning routines that influenced modern-day breakers.

The athleticism, virtuosity and flash of tap dancers the Nicholas Brothers, who caught Hollywood’s attention in the ’40s but who were electrifying stages in the ’30s, planted ideas about what was physically possible on the floor, in the air and using props for effect. The impact of other popular African-American entertainers of the ’30 and ’40s, like Cab Calloway and the Berry Brothers, can also be credited with influencing today’s hip-hop dance styles.

“What we now consider hip-hop dance is the most recent manifestation of a genealogy of dance practices that have been going on since African people came here,” explains D. Sabela Grimes, dancer, UCLA professor, creator of The Funkamental Movement Experience, and host of the 4th Annual J.U.i.C.E. Hip Hop Dance Festival.

Amy “Catfox” Campion, teacher, dancer, artistic director of Antics Performance and co-artistic director of the J.U.i.C.E. Hip Hop Dance Festival, adds, “Dance history is a continuum with various dance styles continually being born, disappearing, developing, evolving, and influencing one another.” She lays out three defining factors when speaking about street dance, a term she uses instead of hip-hop dance as an umbrella term for a variety of street dance forms, including Uprocking from Brooklyn, Breaking from the Bronx, Popping from the Bay Area, Locking from Southern California, Footworking from Chicago, Wu-tang from Philadelphia, Hyphy from the Bay Area, Jerking from Inglewood.

Street dance takes place in unconventional spaces. “It did not emerge in a class or dance studio,” Campion assures, but rather “in everyday spaces like a parking lot, playground, garage, backyard, or community center.” Second, it centers around freestyle, and third, it generally springs up in urban areas.

It seems clear that hip-hop dance is conceived in relation to time, place and space. Grimes adds to the discussion about the inception of hip-hop dances within social contexts. “What’s interesting about hip-hop dance in particular is that we often get caught on the surface level, like these are the hip-hop moves or hip-hop dances, and we don’t think about the social context in which these dances are created,” he offers, “about how the community intelligence, collective intelligence, really gives birth, depending on what urban environment you are in. They are regional, vernacular, corporeal body languages and vocabularies exchanged among people in certain communities that are very relevant to them.” He views hip-hop dance as a conversation that’s wildly popular because of its inclusiveness.

Bradley “Shooz” Rapier, dancer, award-winning choreographer and creator of the Los Angeles-based Groovaloos, says that traditionalists often refer to popping, locking, and breaking as the central styles of street dance. Popping and locking share their birthplace in California and are known as funk styles, a term coined by Electric Boogaloos member Popin Pete for West Coast street dance styles. Popping, or the contraction of muscles to create a pop or hit with the body, hails from Fresno in the mid-’70s, as does the closely related Electric Boogaloo, which adds rolls of the hips, knees, legs, and head to the vocabulary of popping.

Boogaloo Sam of The Electric Boogaloos is credited with coming up with the term Popping. In the late ’60s, while trying the Funky Chicken, Don Campbell inadvertently created what is now known as a “locking” motion, or freezing the arms to the beat. After receiving huge crowd approval, he named the style after himself, Campbellocking, soon shortened to Locking. He formed the world-famous Lockers, which included Toni Basil before she released her #1 hit “Mickey.”

Breaking emerged from the South Bronx in the early ’70s and revolves around of a number of movements, mainly the Toprock, the Downrock, Power Moves and Freezes. Most importantly, “b-boying began with the break,” writes author Joseph G. Schloss, “the part of the song where all instruments except the rhythm section fall silent and the groove is distilled to its most fundamental elements.”

As Campion points out, “Hip-hop dance can mean different things to different people, so one definition is challenging.” What’s clear is that each individual dance style maintains its connection to hip-hop culture as a whole.