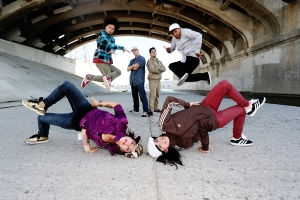 Amy “Catfox” Campion’s arms are sinewy — evidence of her hard work. A longtime b-girl and capoeirista, she is petite, strong and confident. The founder of Antics Performance is standing in front of the 13 street dancers in her crew. Her expression is earnest as she emphasizes the importance of the dancers connecting to their characters. This is something new for everybody. It’s the first time Campion is producing a long-form theatrical piece with a narrative.

“You are assassins,” Campion reminds the two men crouching on the floor. Another dancer portrays a monster, another a tyrant. It’s the second Thursday of September, and inside Campion’s loft on the northwest corner of MacArthur Park, Antics is rehearsing for its premiere of Illuminated Manuscript, which will bring breaking, popping and krumping to Los Angeles Theatre Center (LATC), September 28-30.

The dancers have been running through scenes all afternoon. They break to eat and then head out to the Downtown LA Art Walk to freestyle in the lobby of LATC and hand out flyers for their upcoming show. It’s all part of creating and promoting a new work, which Campion hopes will live on after its debut.

Campion has been involved in street dance and in the Brazilian martial art form Capoeira since her years when she was studying for a BA in dance from the University of Washington. …