Henne and Hutter Collaborate on Cave… at Diavolo 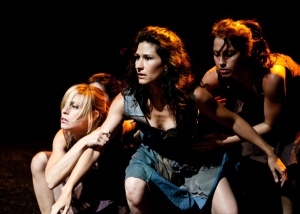 A limber male dancer stands on his hands, his legs split into a triangle; leading actor Brad Culver yells out nonsensical sounds, warming his vocal chords as he stretches his mouth. When the five-minute break ends, Kate Hutter, the artistic director of LA Contemporary Dance Company, huddles with three women, demonstrating how red ribbons flow from their hands to the ground.

Hutter’s collaborator, Aaron Henne, artistic director of theatre dybbuk, watches from the front, his 72-page script in hand. The co-directors (Hutter is also choreographer, and Henne the writer) are holed up at Brockus Project Studios at the Brewery, rehearsing Cave…A Dance for Lilith, their third collaboration, which opens tonight next door at Diavolo Performance Space, running Friday through Sunday until November 18.

The dance theater piece experiments with the collision between text, movement and music. “After our first collaboration Body Mecanique in June 2009, I thought it would be great to continue working together,” says Henne. But for their next joint venture, “Wouldn’t it be interesting to do a piece that’s more narrative, more like a play, where the dance is as much text as the play itself? We bandied that idea around a lot. Finally, about one and a half years ago when I decided to start theatre dybbuk, I was really interested in the first piece having to do with Lilith folklore and Hebrew Goddess mythology.”

Cave…A Dance for Lilith unearths the humanity behind the myth of Lilith, the Hebrew name for a demon goddess. …