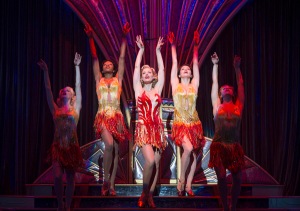 Kathleen Marshall had finished directing and choreographing The Pajama Game for New York’s Roundabout Theatre Company in early 2006 when artistic director Todd Haimes approached her about Anything Goes. The company had obtained the rights to the Cole Porter classic, and Haimes had pegged her for the job. It wasn’t a stretch to assume the musical would be another feather (Grease, Wonderful Town, Kiss Me, Kate) in Marshall’s decorated cap.

She grew nervous just thinking about directing and choreographing yet another revival of Anything Goes. She loved the 1934 classic musical, but it had been remade more than a handful of times. “I saw that beautiful production at [the Vivian Beaumont Theatre at] Lincoln Center in 1987,” she says, “and thought, ‘Uh oh, how am I going to make this fresh?’”

The version she directed and choreographed opened at the Stephen Sondheim Theatre on April 7, 2011, and scored three Tony Awards, including Leading Actress in a Musical and Choreography (Marshall’s third Tony.). …