Circus Oz Returns to UCLA With From the Ground Up 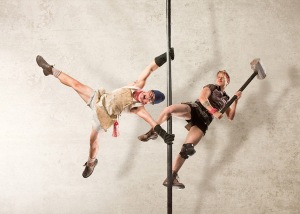 Stevee Mills and Jeremy Davies in Circus Oz’s “From the Ground Up.” Photo by Rob Blackburn

As Mike Finch explains his role as artistic director of Circus Oz over the phone from Tacoma, Wash., loud noises erupt in the background. The Australian company features a 12-piece live band, and Finch is at sound check.

This week, Circus Oz lands in Los Angeles for a four-day run of its From the Ground Up at Royce Hall, as part of the Center for the Art of Performance at UCLA (CAP UCLA) season. It’s the troupe’s first time in LA since the 1984 Olympic Arts Festival — when the company appeared across the UCLA campus at the smaller Freud Playhouse. Reviewing Oz in that 1984 run, Sylvie Drake ended her glowing LA Times notice by proposing a transfer to a larger LA venue:  “If we had any sense at all, we should move them into the Ahmanson after Evita closes and keep them there all summer.”

Finch was equally impressed when he first saw Oz a few years later, when he was 21. “It completely blew me away,” Finch says. He dreamed of selling programs or being a stagehand for the company. “It put together all of the pieces for me, because it was funny, irreverent, musical, spectacular, political.”