Where Brunch Is King 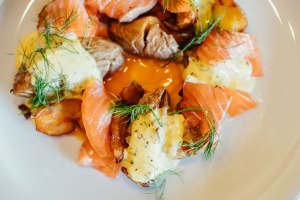 There’s a huge fork on the exterior of 2424 Main St. in Santa Monica, signaling this might be a place to eat. And it is … at least for another month or two, or maybe longer.

What used to be the California-Mediterranean eatery Fork in the Road is now a pop-up brunch and cocktails spot called Little Prince, so named after the French children’s book which chef Ari Taymor’s mother read to him as a kid.

Taymor has a few notches on his culinary belt: He has been named a Food & Wine Best New Chef and was nominated as a Rising Star Chef by the James Beard Foundation. The celebrated culinarian was the force behind Alma, which closed its doors inside The Standard in West Hollywood this past New Year’s Eve.

Perhaps there were many signs pointing to Taymor’s eventually landing on the Westside. His first Los Angeles home was near Rose and Pacific avenues. His first-ever chef job was in Santa Monica, across the street from Little Prince. And he loves to surf. …