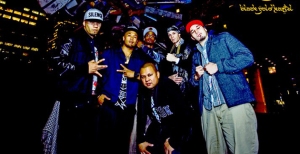 When Poppin’ Pete of the Electric Boogaloos gives your group praise, that’s a very good co-sign. “What I love about these cats is that they take a lot of different styles from the Bay Area to Southern and Central California and combine them,” Pete states on one of Machine Gone Funk’s self-made videos. “Each one of these cats has their own feel, and they are definitely doing their thing on the dance floor.”

Machine Gone Funk began to take shape in the Bay Area in 2003. Bumping into each other at various street dance events, the poppers became interested in forming a group to practice together, inspire each other and create routines. Instead of being the “one popper in a b-boy crew,” Machine Gone Funk wanted to develop a popping group and mirror some of the collectives they admired.

“We got along,” says Nikodemus via telephone from the apartment he shares with Kid Boogie in Norwalk. “We’re all from different ethnicities and backgrounds, and we already had our own dance flavors established. A lot of us were competition winners, but we didn’t get together to be the best group. We got together as friends and to do the dance that we love to do, and we work well together.”

The funky bunch can perform with anywhere from two to 12 of its members. For the J.U.i.C.E. Hip-Hop Dance Festival, Kid Boogie, Bionic and Slim Boogie represented the Funk. Dancing all at once and then breaking into solos, the three made the crowd feel the music, which is one of their aims.

“We want to do what we love, share it with everyone and make them enjoy what we do too,” says Nikodemus. “Popping is a very musical dance. We want people to view the music through our bodies. That’s the main goal, to show music through our bodies and give them the feeling we have when we dance – a cool, fun feeling. It’s not the same as, say locking that makes you feel happy. This is a cool feeling.”

“When we perform for people who don’t know the dance so much, we do add more of a crowd-pleaser type of thing,” admits Nikodemus. “But when performing for dancers, we try to push the boundaries of what we do as dancers, while keeping the true essence of the dance. That’s always our goal to this day.”

During Machine Gone Funk’s performance at J.U.i.C.E. Kid Boogie held up a sign that read, RIP Skeeter Rabbit, one of their mentors and a pioneer of the art form who died in 2006. Kid Boogie has Skeeter Rabbit’s name tattoo’d on his chest. The group often dedicates its performances to Skeet and another group member, Tapu, who died in a car accident.

It’s a Monday night, and the guys are gathered in Norwalk for their weekly practice.
J-Smooth lives close by, as does Hugo, aka Mr. Smooth, another of their mentors and a friend of the Electric Boogaloos. Tonight they’ll get down on the apartment complex’s racquetball court. Often, they try to make it to Homeland Cultural Center in Long Beach to practice, or they travel to the homes of others members in Van Nuys or West Covina.

According to the group, what makes them unique is that each member contributes their ideas, and the result is “taking the dance to a place that hasn’t been seen before.” They also produce entertaining videos that showcase their dancing abilities throughout gritty urban landscapes that match the intensity of their moves. “We all know how to film dance because we’re dancers,” states Nikodemus. “We have a guy who has filmed the last couple of videos, Rod from Immortal Clothing, but Machine Gone Funk is the director.”

As for the future of the Funk, all of the dancers realize living in the U.S.A. presents a major challenge. “All of us are striving to dance full time and most of us do, but it can always be better, especially in the U.S.,” explains Nikodemus. “If we were living in Japan, Korea or France, it would be a full-time job. In Korea, it’s easier because the government supports dancers. There are professional dance teams that get paid just like professional baseball teams here. In France, the government supports dancers. It’s a lot harder to live as a dancer here doing what we do. But we will always be dancing, doing what we do, and influencing the world with our dance and positive energy.”