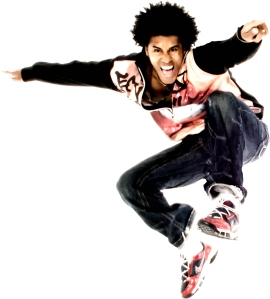 Bradley Rapier, founder of the Groovaloos and street dance instructor at various locations, including University of Southern California, illustrates some hip-hop dance styles, from popping to party, while one of his students shows off his breaking skills. For more information on the Groovaloos and Bradley, visit bradleyrapier.com, groovaloo.com and groovaloos.com.

Breaking: Emerged from the South Bronx in the early ’70s and revolves around of a number of movements, mainly Toprock, Uprocking, Power Moves, Footwork and Freezes.

Locking: In the late ’60s in Los Angeles, while trying the Funky Chicken, Don Campbell inadvertently created what is now known as a “locking” motion, or freezing to the beat. The art form is loose and extremely funky, yet crisp, strong and athletic at the same time.

Party: A variety of simpler dances reflecting the music and culture of the time that influence the larger street dance disciplines with names like the Freak, the Rock, the Gigolo, Running Man, Roger Rabbit, Robocop, Rooftop, Reject and the Dougie.

Popping: The contraction of muscles to create a pop or hit with the body, hailing from Fresno in the mid-late ’70s.

Popping – Electric Boogaloo Style: Adds twist-o-flexs, rolls of the hips, knees, legs and head, and boog style to the vocabulary of popping.