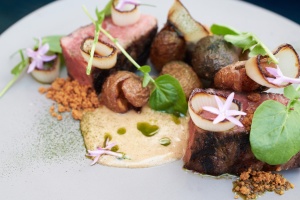 Enter Abbot Kinney Boulevard, where there’s a place to get a bite or a drink at almost every step. And Neighbor, in the spot where Willie Jane operated for eight years until November 2016, is one of the newest restaurants to open. It’s just a few doors down from Felix Trattoria, which occupies the space where Joe’s Restaurant stood for 24 years.

“It feels good to launch a concept on a street that is a real destination,” says Neighbor owner Kristian Vallas. “I’ve lived in the neighborhood for about 17 years, so it’s special to create an experience for our friends and neighbors, many who live in walking distance.”

Carver, who helped open downtown L.A.’s Bestia and has worked hands-on with Bill Chait (The Rose, Republique) over the last nine years, says the street’s built-in competition begs the question: “What do we do to separate ourselves from the hoard?” …