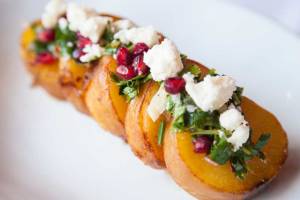 Zagat has spoken: Los Angeles was the most exciting food city in America in 2017. And many of the restaurants and chefs putting L.A. at the top of the Zagat list actually work in Santa Monica, which makes the city perfectly suited to host its own Restaurant Week.

Unlike other such culinary programs that focus on meal discounts, Santa Monica Restaurant Week celebrates Santa Monica’s healthy eating scene. The city boasts four weekly farmers markets that are packed three days a week: Wednesday, Saturday and Sunday. And Santa Monica is, after all, a popular tourist destination where locals can bike ride, roller skate, surf, swim and paddleboard all year round. Eating well is the way
to live here.

Spanning Jan. 8 to 14, Santa Monica Restaurant Week has more than 30 restaurants across eight neighborhoods offering at least one dish that features a special ingredient available this winter at any of the city’s farmers markets. It could have been blood orange, cauliflower, kale, or the tangerine, but this year Santa Monica Travel & Tourism picked the pomegranate: a ruby-red fruit that’s rich in Vitamin C and antioxidants. …